The History of Second Baptist Church

After the Civil War, a veteran named Robert Johnson returned to Falls Church and was persuaded and trained by Rev. Hiram Reed to qualify for the ministry. Rev. Johnson was ordained at the 19th Street Baptist Church, Washington, DC and became the first minister of Second Baptist Church in 1870. Elder Reed was the pastor of the First Baptist Church, a white church, now known as Columbia Baptist Church.

Prior to 1870, the Baptist and Methodist worshipped together until the Methodist acquired property and built their church in 1862. The Galloway United Methodist Church is now on this property. Inspired by the Methodist, plans were made to build a church on "Baptist Hill" and through great sacrifice by Thomas Green, Bill Stewart, Nathan Rummels, Stephen Bowman, Moses Jones, Alonzo Massey, Rueben Tyler, Sallie Byrd, Albert Dixon and others, part of the land we now occupy was purchased.

In 1872 an excursion to Richmond, VA was made to get money to build a church on "Baptist Hill". Meeting with success, the church was built with hand-hewn timber and nails forged in the blacksmith's shop. This two story building was used as a school during the week and for church services on Sunday. The first school teacher was Mrs. Ada Gray from Arlington, Va. Women assisted in financing the church by picking blackberries and walking to and from Georgetown, DC to sell them at the farmer's market.

In 1900 Rev. George W. Powell was recommended by Rev. Robert Johnson to the Second Baptist Church. At 28 years of age, he accepted the pastorate of Second Baptist church and grew up with every generation in the community aiding in molding the lives of its members, economically, civically as well as religiously. He encouraged the "Colored People" to purchase land and build homes and to keep their children in school at any cost. After preaching in the old church for many years, Rev. Powell convinced the membership that the church was unsafe for continued use therefore efforts should be made to raise funds for a new church.

In 1921 enough money had been raised to purchase window frames and start a foundation. On June 22, 1922 the conerstone was laid. In the fall of the same year, $1,020.00 worth of building materials were purchased from Murphy & Ames and stored in the basement of the old church until January 1924. Construction was slow because of the lack of materials until 1925 when a loan of $4,000 was secured from Mr. M.E. Church, a white businessman in Falls Church. To secure the loan, mortgages were taken on the homes of Rev. & Mrs. George Powell, Mr. & Mrs. William Lee, Mr. & Mrs. Henry Taylor, Mr. & Mrs. William Carpenter, Mr. R.J. Evans and Mr. & Mrs. Newton Robinson.
On January 25, 1926 work began in earnest to complete the church with most of the work done by members of the church. By this time, credit had been established so there were no problems obtaining supplies. The artistic windows were purchased and hung and on July 26, 1926 the church was dedicated with an elaborate "All Day Service".
In less than three years, the debt was paid and the mortgage was burned by Sisters Jennie Denny and Adeline Stewart. The ashes were placed in the church vault. Rev. Powell's next project was to get the officials to purchase land to enlarge the cemetery.

For 33 years, the Second Baptist Church continued to progress under the leadership of Rev. George W. Powell until January 10, 1933 when he was called to Heaven. Rev. Powell's years at Second Baptist were augmented by his lovely wife, Josephine and daughter Ethel.

In April 1935, Rev. Wallace Earl Costner was called to the pastorate. He was installed in May 1935. He was dedicated to the church and community. During his administration, the church prospered spiritually and financially. The membership increased to its highest number ever attained. New organizations were formed enabling each member to become actively involved. The young people were integrated into the church body and not just considered Sunday School material. Second Baptist became a family church with its doors open to host Girl and Boy Scout Troops, Mother Goose Nursery and many community affairs.

Physical improvements during this period were the renovation of the church including new pews, indoor rest rooms, pastor's study, an officer's room, the dining room and kitchen were completed; the baptistery was relocated to the lower auditorium and a 2000 pound bell was purchased from the Congregational Church. In addition, new pulpit furniture was purchased; central heating and air conditioning systems were installed. His last accomplishment was the erection of the $175,000 Costner Educational Annex. His wife, Anna R., son Wallace E. Jr. and daughters Earline Costner Arnold and Marion Costner Selby had definite parts in the daily operations of the church. Rev. Costner took his homeward flight on October 9, 1971.

On July 19, 1972, Rev. James E. Browne, Sr. was elected to the pastorate of Second Baptist Church. He united with the church in 1967 and served as Assistant Pastor and Director of Christian Education. He was an avid admirer of the late Dr. Costner and pledged to fulfill his dreams. The church continued to progress spiritually and financially, keeping the church body as a family. He baptized over 175 converts; blessed over 50 babies and extended the Right Hand of Fellowship to at least 500 during his first 15 years. Under his leadership, the Youth Department was reorganized, the Gospel Chorus was formed and the Music Department was reorganized. A weekly Bible Study Class was organized, The Birthday Clubs were revitalized and became an integral part of the financial system of the church. The first Constitution and By-Laws were adopted. An efficient financial system was devised and implemented, including a computer terminal and word processor. Church vehicles were purchased as well as a new piano and organ. The dining room and bath rooms were renovated, and a new public address system and lighting fixtures were installed. In addition, new rugs, furnace, glass protectors for the stained glass windows were purchased. Rev. Browne had the assistance and devotion of his family: wife, Hazel Browne; daughter, Lillian Browne Fernanders and son, James Browne, Jr. After 33 years of dedicated service, Rev. Browne retired in December 2005. He went home to be with the Lord on February 7, 2010.

Upon his retirement, Rev. Browne recommended Rev. Samuel D. Barnhart, Sr., one of the Associate Ministers to serve as the acting pastor of Second Baptist Chruch. Rev. Barnhart served in that position until January 2007 when he was elected as the Pastor of Second Baptist Church. Like the pastors that preceded him, Rev. Barnhart is actively involved with the Lott Carey Foreign Mission Convention, the Baptist General Convention, the Progressive National Baptist Convention, the Minister's Conference of Northern Virginia and other civic organizations. The church continues to prosper spiritually and financially and our church body is still a family. Under Rev. Barnhart's leadership an IT Ministry has been formed, the S.H.A.R.E. Food Network was started, the Food Bank was started, a 62" screen television was acquired to enhance our Christian Education Department, a new 15-passenger van was purchased, a 7-passenger van was donated and new windows were installed in the Annex. The Body and Soul Ministry was introduced as well as the Dance Ministry. The public address system has been upgraded, the music ministry has been enhanced and blessed with the appointment of our Minister of Music, Rev. Kevin Thompson, Sr. Our Christian Education Department has been re-energized and continues to meet the spiritual needs and desires of our church family . Under Rev. Barnhart's leadership, SBC now has an official website and email address to assist our members and friends. Rev. Barnhart is supported by his wife, Devera R. Barnhart.

Through prayer, worship and praise our membership has grown and we are no longer in that "two-room" log cabin. We believe in the Baptist Doctrines and Principles based on scriptures from the Holy Bible. We are a Bible teaching church with community outreach programs designed to help those in need. We are often called "the church on Baptist Hill with the sweet sweet spirit." Come and join us for one or more of our weekly services. 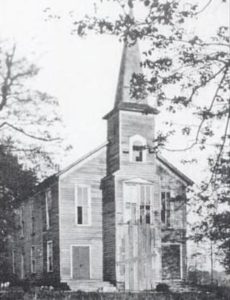 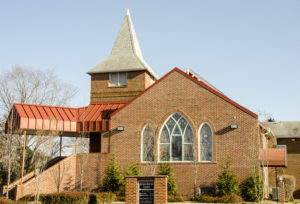